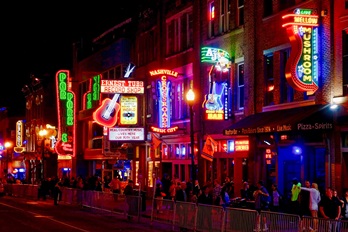 Car accidents kill more than 40,000 people each year, according to the National Highway Traffic Safety Administration (NHTSA). Over the past few decades, motor vehicle crashes have claimed the lives of several prominent musicians, including some who were born, lived, or died right here in the Country Music Capital of the World. Here's what you should know.

Born in Nashville in 1946, Howard Duane Allman was a talented guitarist and session musician who's credited with pioneering the southern rock genre. He rose to fame in 1969 as the co-founder and original leader of the Allman Brothers Band, which earned him a posthumous induction into the Rock & Roll Hall of Fame in 2005. Allman died in a motorcycle accident in Macon, Georgia, in October 1971, when he swerved to avoid a truck, causing his bike to flip over and skid more than 50 feet with him pinned beneath it. He was just 24 years old. Allman is remembered as one of the greatest guitarists of all time, according to Rolling Stone.

Hailed as one of the most influential women in country music, Dottie West won the first-ever Grammy Award for Best Female Country Vocal Performance in 1965 for her hit song, "Here Comes My Baby Back Again." In addition to a successful solo career that spanned more than three decades, she also recorded a series of chart-topping duets with country music legend Kenny Rogers in the 1970s.

West was a Tennessee native who was born about an hour northeast of Nashville in a small community named Frog Pond. She died in August 1991 at age 58 after getting into a car accident on her way to the Grand Ole Opry. When her car stalled en route, West accepted a ride from a neighbor, who lost control of his vehicle while exiting the freeway and crashed into the center divider. She passed away three days later as a result of internal injuries. The Country Music Hall of Fame recognized her trailblazing accomplishments with a posthumous induction in 2018.

Born Taylor Dawn Carroll, Taylor Dee was an up-and-coming country music performer from Texas who died in a rollover crash in March 2021 when she was just 33 years old. The nighttime accident occurred when Dee missed her exit and slammed into a barrier, causing her SUV to roll, hit an overhead sign, and eject the singer (who wasn't wearing a seat belt) from the vehicle.

Dee released her debut album, The Buzz, as well as a lead single of the same name in August 2019. After Dee's death, Linda Wilson, the president of the Texas Country Music Association, remembered the rising star as "the real deal—a true talent with a heart and passion not only for her music but for people," adding that she would be "missed tremendously."

Kyle Rae Harris, a single mom and singer-songwriter from Texas, released two full-length country albums and a self-titled EP before her death in an alcohol and speeding-related collision in September 2019. Harris's vehicle hit a car and crossed into oncoming traffic, striking a second vehicle and killing 16-year-old Maria Cruz. According to the Taos County Sheriff's Office, Harris's toxicology report revealed a blood-alcohol level more than three times the level limit, and an investigation into the wreck showed that she was driving over 100 mph when it occurred.

Amie Comeaux is a country singer who performed at nursing homes and weddings as a child before finding fame as a teenager in 1994 with the release of her debut album, Moving Out. Though poised for a successful career in country music, Comeaux died in a car accident just three years later—in December 1997—when she was only 21 years old. Her vehicle hydroplaned in heavy rain and crashed into a tree, killing her instantly. Comeaux's discography also includes two posthumous albums, which were released in 1998 and 2007.

Was Someone You Love Killed in a Car Accident?

Weir & Kestner Injury Lawyers can help you explore your legal rights and options. Complete our online contact form or call 615-220-4180 to schedule a free initial consultation.